On January 1st, 2014 I made the decision to chronicle the unknown musical activities taking place in my brain during all the waking hours until December 31st of 2014.

I should begin by noting that the idea of musical note-taking is not something I first experienced on that date. I have been experienced in recording my musical ideas since I was 12. I always had tape recorders and treated them with great care and fascination. I recall making my first tape when I was 10 of myself and Daniel (my cousin who was 12), comprised of bits which we recorded comedically in hotel rooms and gas station toilets, while my parents drove us on a cross country summer vacation. […I’ll never possibly begin to understand what could have happened to that first brilliant cassette. Vanished….] The recorder was my first version of iTunes, just laying over songs I would come across and capturing them with a mic before, at age 12, I figured out how to wire a pair of external connectors to my parents’ stereo cabinet, which allowed me to copy over anything from a turntable onto my portable cassette recorder without also hearing the hushed conversations taking place across the room…(!).

My love of music making began promptly that same year, when I realized I was completely frustrated musically, by never having taken or shown an interest in learning an instrument. Now at age 12 I found myself wanting to sing all sorts of new musical ideas I was suddenly hearing, though I quickly realized I was also attempting to do this without even the faintest hint of a decent singing voice. […My cassettes became very private after that, while I began working on improving upon my croak…] Learning the guitar by the frustrated age of 14 made it even more of an imperative that I also start to use this as the tool to explain my musical ideas with.

I turned to recording my ideas in my own musical shorthand for the rest of my life. Often, also turning them into full ideas and production once my studio skills came a few years later. But the idea of musical journal has never been too far away. It forced me to become extremely methodical about keeping a fully current library of these ideas, which are all carefully, named, categorized and flagged with keywords and tempos. I put a lot of time into coming up with this system because it never let me down.

Anyway, back to January 1st, 2014, when I found myself thinking about a time back in 2001 when I had wanted to silence that “inner radio.” I thought it was a disruption in my conscious thought; possibly a conflicting voice competing for attention, and some of it just sounded so silly and obnoxious, that I found myself reacting often like an enraged hotel guest, complaining to the manager downstairs about the constant noise coming through the walls.

It occurred to me, upon this January 1st, that I’d never deliberately “acted” upon my musical instincts before, in any kind of regular way using the recorder, which is never far from my side. I wondered how many ideas like this pass through the freeway of my brain without a hint of a second notice. I figured there’s a great likelihood that a lot of inner musical censorship is always taking place, and as we all, know, the network censor always knows best. Right?

This involved taking a year off, in some ways, at least from other, competing activities. There was a tremendous amount of admin around the project, and creativity, of all sorts, were allowed to triumph even in a race against time. A proper measurement of my creative worth – as some sort of annual figure – appeared to be the prize at the end of the stick.

Needless to say, I did an experiment. Now, here is what happened: 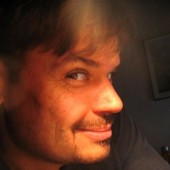 Filter Tracks By Mood or Texture

Filter by Day For Night Release