Back to Social Media homepage :: Services & Portfolio of Work >>

The Andy Lakey brand campaign extends through 12 websites, film, soundtrack work and print, covering the artist’s work in the US and Japan.

Music video from Eric Scott of “Arcadia,” set to the May 20, 2012 annular solar eclipse. The film was recorded between 6:20 and 6:35 pm on May 20, 2012, using a consumer grade-HD Sony camera, filming through 3 pairs of sunglasses from the front of the Day For Night studio in the north San Fernando Valley, Southern California. 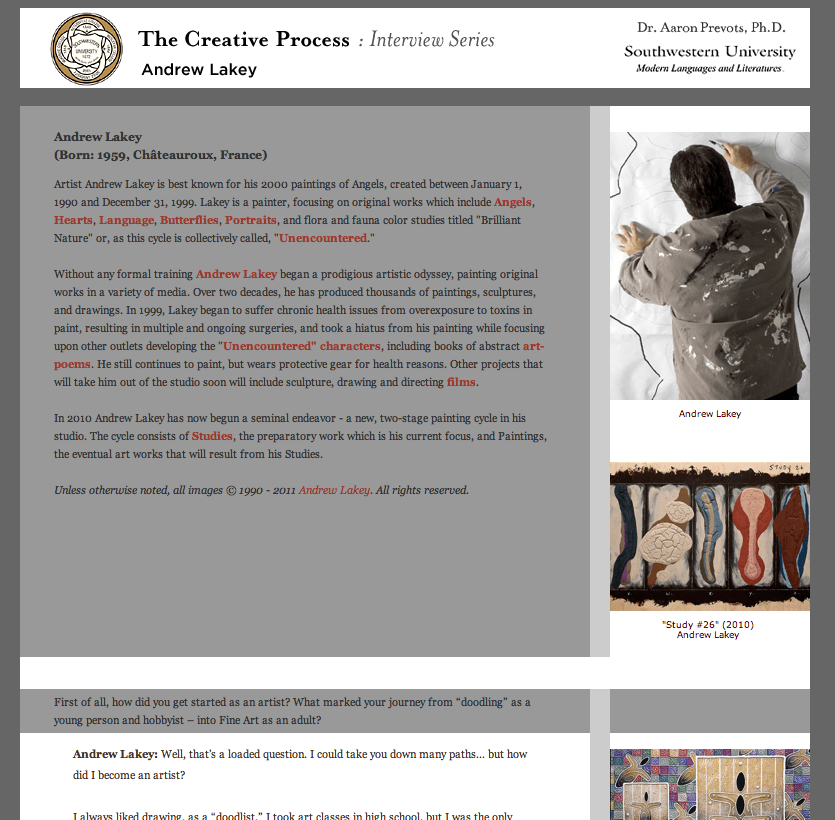 Melissa Vardey’s “(A Funny Thing Happened On The Way To)
FORECLOSURE: The Musical”… One woman’s journey from desperation to salvation (via escrow) 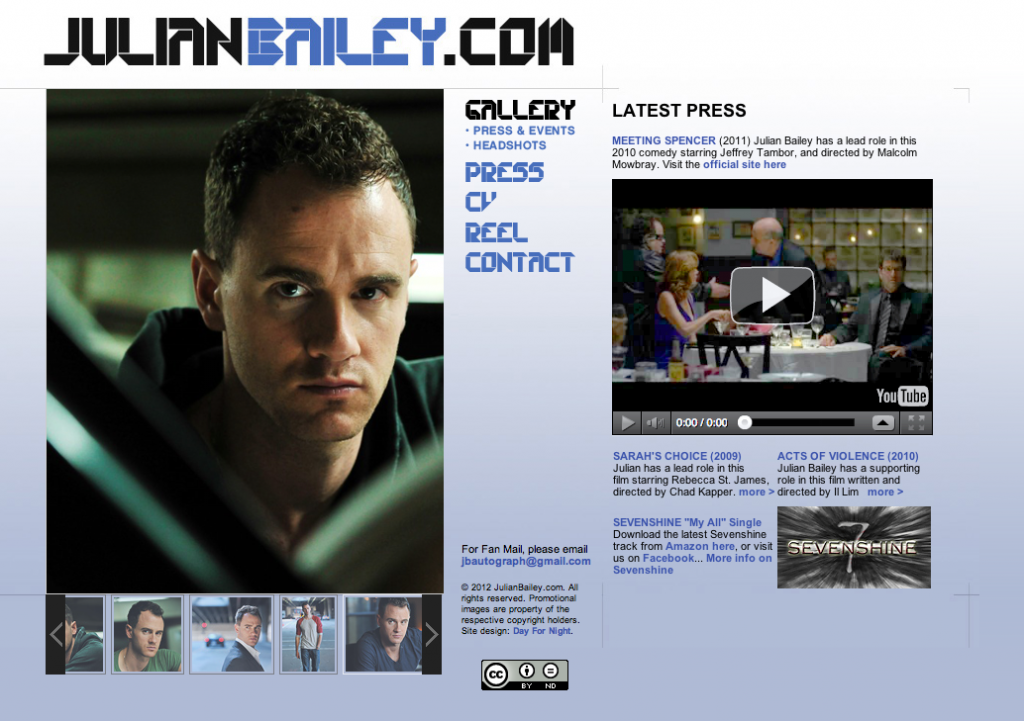 The Everyday on Day For Night

In Part 1, creative director Eric Scott dissects the website TalkAboutIt.org, weaving its creative development, from strategy to completion, into an audio travelogue. As podcasts go, this is definite headphone listening!

TalkAboutIt.org was devised by Greg Grunberg (star of NBC’s HEROES), in collaboration with the Epilepsy Foundation. More on Talk About It!

Mr. No-Logo on Day For Night

Join the Day 084 NIGHTspace community – post a personal rant on Music That Ruined My Life, New Music Uploads, or Ask Eric (“…What were you thinking?” it’s a reasonable question) or enjoy user-posted videos, photos, blogs and workshops.

We enhance messages by intensifying meaning; by bringing our own life experiences into focus – the end product engages a clearer relationship between “subject” and “audience.”

Do our own creations inform our abilities and desires to share this gift of inspiration with others?

Do our dreams give us the drive to seek out the people and the things we love most?

Künstfabriken on Day For Night

Found on Day For Night

Rhythm Factory on Day For Night

Fuzzknobs on Day For Night

Main areas of Digital Strategy include our consultation and creative services in the following:

Day For Night would LOVE to sit down to have a chat with you. Not just to get to know you (honestly, that’s really a big part of the fun) but also to help guide your company’s brand towards a successful digital presence. To us, that’s what digital strategy is — getting to hear what you believe in, what your brand is all about (or going to be about) and helping provide you with quality options to further your vision.

The difference between ‘digital strategy’ and our other creative services is that the focus can be simply upon . We’d love to design for you, but if you’ve already got that, there’s so much more left to discuss regarding your long-term goals. Your digital archival legacy, your user experience, and your social medial all fit into the big picture which we embrace as part of your overall creative strategy…

So let’s get our heads together, and make that happen.

Some of our work and clientele in this area:

Social media is at the heart of what you do to keep your name in front of your clients, your best friends and your competitors.

You need to stay current with your social branding campaign in order to stay relevant. If you’re not already using all the social tools available to the best of your strengths, then look to this as a learning opportunity, at the very least. We will happily consult with you on how to extend the reach of your brand for future growth and development, to ensure you have a shot in the real world. 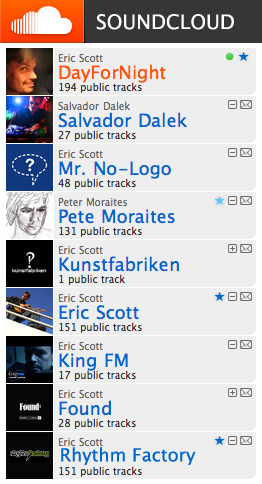 Eric Scott, Art & Musical Director for Day For Night: “With instrumental, and especially textural electronic music, the primary relevance of music is clearest – namely, that music doesn’t really mean anything – it doesn’t need all sorts of lyrics and words and gimmicks in order to be successful.” Therefore, it feels appropriate that a non-narrative presentation format needed to be developed for Day For Night, to allow for individual die-cut panels, which could be viewed in any particular sequence within a given set of 10, just like random-shuffle programming on a CD player… Let’s face it, by 1991, there was no longer any real pacing of booklet content to digital audio listening.

In late 1991, Eric Scott – a disenfranchised young recording engineer and studio boffin – accepted a night-time design position with a local graphic design production house. In the mind of teaching himself vitally-needed Aldus Freehand skills, and experimenting with design and layout ideas, Eric worked diligently for a year, building out an as-yet non-existent art direction portfolio, between the hours of 10PM and 3AM every morning, before locking up the studio during the final shift of the night.

Eric’s earliest projects were to evolve into cover designs for his emerging Day For Night label. “I knew I had to do my own designs. There was simply no way I was going to trust anyone else to design the packaging for music I was ultimately responsible for, and had slaved so hard to produce. I knew – from the moment I’d figured out what it was about truly great graphic design that I was so passionate about – that I had to rise to this new challenge, and learn the skills necessary to produce my own visuals. They were, after all, and in my own mind, married to the music.” 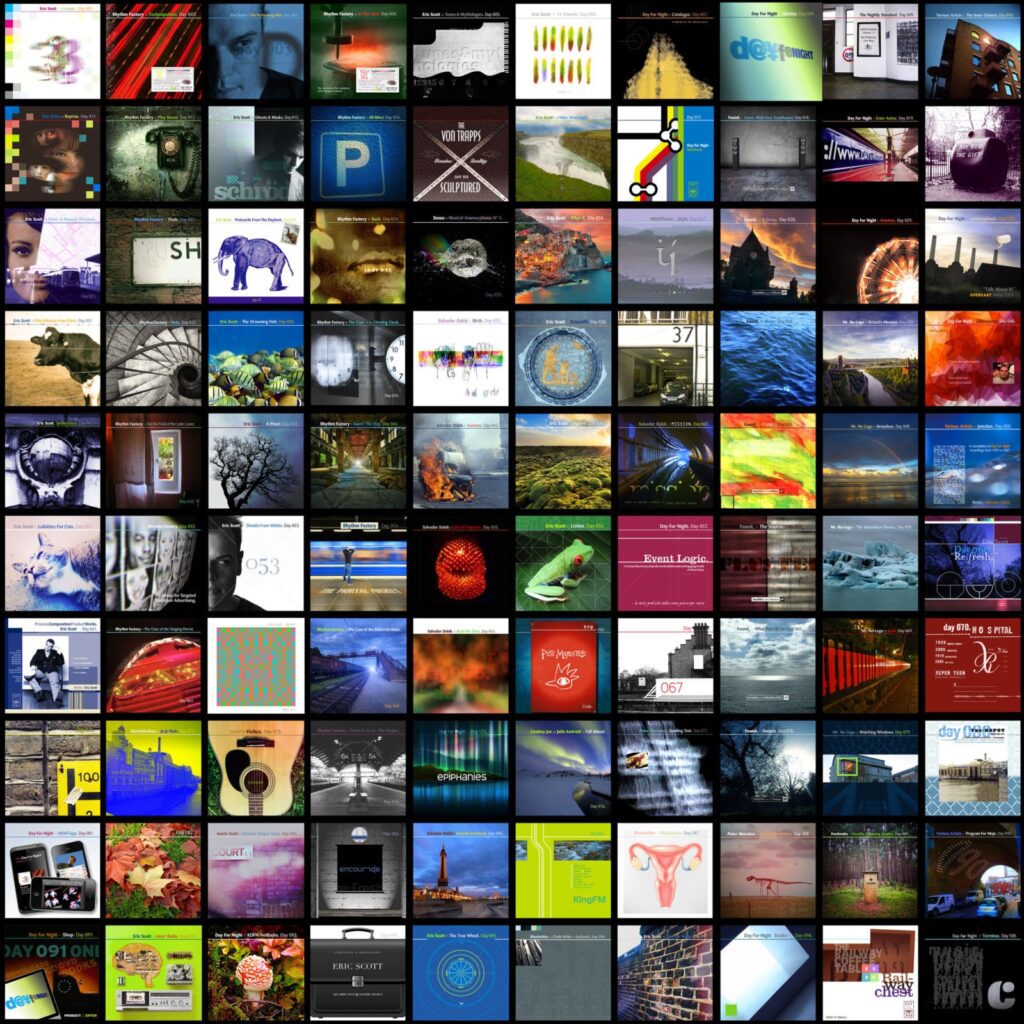 By this time, Day For Night was already set for its first six releases, (Day 001 through Day 006) – but as yet, had no album art or visual identity. The first attempts to focus in a single direction were chaotic – and thus began a passionate phase of investigation and research into the history of graphic design, and relevance for the aspiring young art director, whohad not attended art school, and lacked a proper design education. A process which went on for the next seven years, during which Eric had to align with a relevant methodology for representing visual ideas as album cover artin the digital age.

Although CD covers managed to preserve the square format of vinyl records, he still claims often to be put off by some design formats found in many artist’s CDs – the eco-friendly DigiPak® foldover design (was it merely a statement of disposability?) or just plain awkward (jewel case fold-outs that sequentially unfolded panels, attempting to reveal information in ways contrary to the message of the music).

Eric continues: “Album design had come to feel empty. If you really want to question the meaning – such as, ‘What am I meant to read into this, and in what order?’ then the pop CD packaging I saw around me was still attempting to guide reading in a linear manner, that did not relate to the non-linearity of the music. Ultimately, the electronica I was creating was a statement away from the more traditional “narrative” stance enforced by the previous school of design thinking, where elaborate, and often expensive design conceits – many of which were a bit too self-important – seemed almost as vacuous as dinosaur rock.

“Ultimately, I’m a record-sleeve junkie. I grew up with sleeves and album art of the 70s and 80s, and slowly learned that, in the hands of capable designer, the better the art, the more memorable the album. There’s actually a great correlation I’ve found between the intuition I use when I browse music in shops, and the graphic tastes of the designers who do sleeves for the artists I like. For the art director or designer, great album design means that you should really tap into the minds of the kinds of fans who would buy such a record. There’s really an awful lot more to talk about there.”